The French Revolution : The Reign of Terror 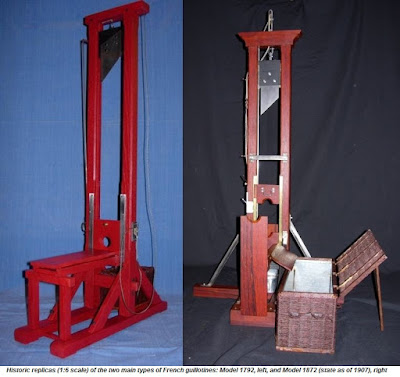 The period from 5 September 1793 – 28 July 1794 is referred to as the Reign of Terror. Robespierre followed a policy of severe control and punishment. All those whom he saw as being .enemies. of the republic, ex-nobles and clergy, members of other political parties, even members of his own party who did not agree with his methods, were arrested, imprisoned and then tried by a revolutionary tribunal. If the court found them ‘guilty’ they were guillotined. The guillotine is a device consisting of two poles and a blade with which a person is beheaded. It was named after DrJoseph-Ignace Guillotin who invented it.

The death toll ranged in the tens of thousands, with 16,594 executed by guillotine (2,639 in Paris), and another 25,000 in summary executions across France. 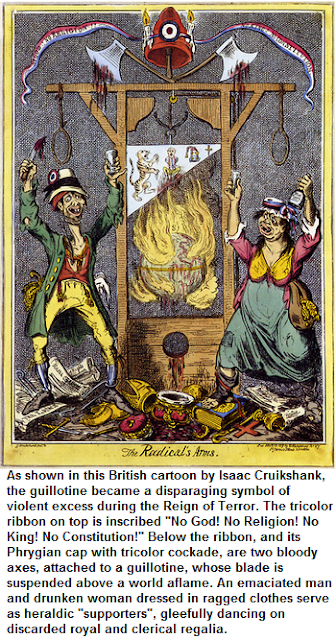 Robespierre’s government issued laws placing a maximum ceiling on wages and prices. Meat and bread were rationed. Peasants were forced to transport their grain to the cities and sell it at prices fixed by the government. The use of more expensive white flour was forbidden; all citizens were required to eat the pain d.égalité (equality bread), a loaf made of wholewheat. Equality was also sought to be practised through forms of speech and address. Instead of the traditional Monsieur (Sir) and Madame (Madam) all French men and women were henceforth Citoyen and Citoyenne (Citizen). Churches were shut down and their buildings converted into barracks or offices.

During the Reign of Terror, extreme efforts of de-Christianization ensued, including the imprisonment and massacre of priests and destruction of churches and religious images throughout France. An effort was made to replace the Catholic Church altogether, with civic festivals replacing religious ones. The establishment of the Cult of Reason was the final step of radical de-Christianization. These events led to a widespread disillusionment with the Revolution and to counter-rebellions across France. Locals often resisted de-Christianization by attacking revolutionary agents and hiding members of the clergy who were being hunted. Eventually, Robespierre and the Committee of Public Safety were forced to denounce the campaign, replacing the Cult of Reason with the deist but still non-Christian Cult of the Supreme Being. The Concordat of 1801 between Napoleon and the Church ended the de-Christianization period and established the rules for a relationship between the Catholic Church and the French State that lasted until it was abrogated by the Third Republic via the separation of church and state on 11 December 1905. The persecution of the Church led to a counter-revolution known as the Revolt in the Vendée.


Robespierre pursued his policies so relentlessly that even his supporters began to demand moderation.
Robespierre saw no room for mercy in his Terror, stating that "slowness of judgments is equal to impunity" and "uncertainty of punishment encourages all the guilty". Throughout his Report on the Principles of Political Morality, Robespierre assailed any stalling of action in defense of the Republic. In his thinking, there was not enough that could be done fast enough in defence against enemies at home and abroad. A staunch believer in the teachings of Rousseau, Robespierre believed that it was his duty as a public servant to push the Revolution forward, and that the only rational way to do that was to defend it on all fronts. The Report did not merely call for blood but also expounded many of the original ideas of the 1789 Revolution, such as political equality, suffrage and abolition of privileges.


On 23 May 1794, a young woman by the name of Cécile Renault attempted assassination of Robespierre. At this point, the decree of 22 Prairial (also known as law of 22 Prairial) was introduced to the public without the consultation from the Committee of General Security, which, in turn, doubled the number of executions permitted by the Committee of Public Safety.


This law permitted executions to be carried out even under simple suspicion of citizens thought to be counter-revolutionaries without extensive trials. When the Committee of Public Safety allowed this law to be passed, the Convention began to question them, out of fear that Robespierre and his allies might come after certain members of the Convention and even the Committee itself due to the excesses carried out by its on-mission representatives such as Joseph Fouché, Jean-Baptiste Carrier, Jean-Lambert Tallien, and several others.This was part of the beginning of Robespierre's downfall. 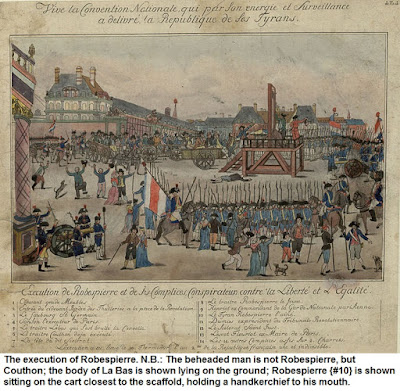 Robespierre appeared at the Convention on 26 July (8th Thermidor, year II, according to the Revolutionary calendar), and delivered a two-hour-long speech. He defended himself against charges of dictatorship and tyranny, and then proceeded to warn of a conspiracy against the Republic. Specifically, he railed against the bloody excesses he had observed during the Terror. He also implied that members of the Convention were a part of this conspiracy, though when pressed he refused to provide any names. The speech, however, alarmed members, particularly given Fouché's warnings. These members who felt that Robespierre was alluding to them tried to prevent the speech from being printed, and a bitter debate ensued until Barère forced an end to it.


Members of The Convention ordered the arrest of Robespierre, his brother Augustin, Couthon, Saint-Just, François Hanriot, and Le Bas.
Robespierre was declared an outlaw, and condemned without judicial process. The following day, 10 Thermidor (28 July 1794), he was executed with 21 of his closest associates.


What is liberty? Two conflicting views:
The revolutionary journalist Camille Desmoulins (Lucie Simplice Camille Benoît Desmoulins) wrote the following in 1793.  Camille Desmoulins (2 March 1760 – 5 April 1794) was a journalist and politician who played an important role in the French Revolution. He was a childhood friend of Maximilien Robespierre and a close friend and political ally of Georges Danton and Jean-Paul Marat, who were influential figures in the French Revolution. Desmoulins was tried and executed alongside Danton in response to Dantonist opposition to the Committee of Public Safety. 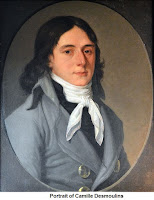 ‘Some people believe that Liberty is like a child, which needs to go through a phase of being disciplined before it attains maturity. Quite the opposite. Liberty is Happiness, Reason, Equality, Justice, it is the Declaration of Rights… You would like to finish off all your enemies by guillotining them. Has anyone heard of something more senseless? Would it be possible to bring a single person to the scaffold without making ten more enemies among his relations and friends?’

On 7 February 1794, Robespierre made a speech at the Convention, which was then carried by the newspaper Le Moniteur Universel. Here is an extract from it:
‘To establish and consolidate democracy, to achieve the peaceful rule of constitutional laws, we must first finish the war of liberty against tyranny .. We must annihilate the enemies of the republic at home and abroad, or else we shall perish. In time of Revolution a democratic government may rely on terror. Terror is nothing but justice, swift, severe and inflexible; . and is used to meet the most urgent needs of the fatherland. To curb the enemies of Liberty through terror is the right of the founder of the Republic.’ 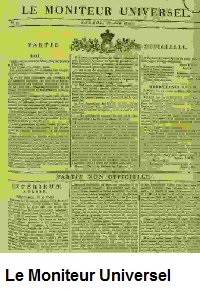 Le Moniteur Universel was a French newspaper founded in Paris on November 24, 1789 under the title Gazette Nationale ou Le Moniteur Universal by Charles-Joseph Panckoucke, and which ceased publication on June 30, 1901.

Translate This Blog in to your language